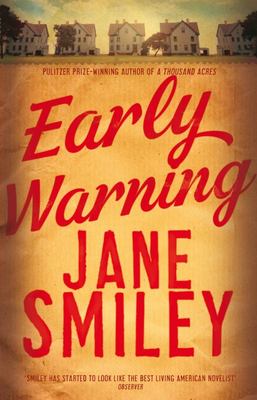 The second novel in the dazzling Last Hundred Years trilogy, Early Warning follows the Langdon family from the 50s, through to the 1980s, in this stunning family saga from the winner of the Pulitzer Prize 1953. When a funeral brings the Langdon family together once more, they little realize how much, over the coming years, each of their worlds will shift and change. For now Walter and Rosanna's sons and daughters are grown up and have children of their own. Frank, the eldest - restless, unhappy - ignores his troubled wife and instead finds himself distracted by a face from the past. Lillian must watch as her brilliant, eccentric husband Arthur is destroyed by the guilt arising from his secretive government work. Claire, too, finds that marriage is not quite what she expected it to be. In Iowa where the Langdons began, Joe sees that some aspects of life on the farm never change, while others are unrecognizable. And though a few members of the family remain mired in the past, others will attempt to move beyond the lives they have always known; and some will push forward as never before. The dark shadow of the Vietnam War hangs over every one ...In sickness and health, through their best and darkest times, the Langdon family will live and love and suffer against the broad, merciless sweep of American history. Moving from the 1950s to the 1980s, Early Warning by Jane Smiley is epic storytelling at its most wise and compelling from a writer at the height of her powers.

The second novel in the dazzling Last Hundred Years trilogy, from the winner of the Pulitzer Prize

Gripping family saga. It seems to be a prerequisite of the modern novel that after a few chapters of contemporary storytelling we are pinged back in time so that author can tell a parallel story ... Typical, then, of the quietly great Jane Smiley to take a very different tack. Her approach to telling a story that spans generations is simply to write a hundred chapters, over three volumes, describing the events in a family starting in 1920 with one chapter for each year ... Early Warning, opens where the last one left off, in 1953. This is a world of women with big hair and girdles who smoke while breastfeeding. You'll recognise them and their homes and their whisky-drinking husbands from Mad Men, of which this is the epic literary cousin ... While the men's lives revolve around politics, business and sexual insecurity, the women are having a rather interesting time discovering psychoanalysis, contraception and feminism. The changing world of childrearing, as Doctor Spock gives way to Penelope Leach, is especially amusing to read about with the benefit of hindsight, but no less moving for it, as each mother tries her best to do and feel all the things expected of her. Smiley is a writer who, in a long career spanning work in almost every genre, has always made sure the reader is having a good time ... Her most famous novel, the 1991 Pulitzer-winning A Thousand Acres, which transposes King Lear to another Iowan farming family, is in a way the parent of this one, but what she is doing now is even more ambitious (and it takes a writer of quite some calibre to do something more ambitious than rewrite Shakespeare) ... she succeeds effortlessly and without tricks. The phrase "a great novelist at the height of her powers" is so overused, but for once here it really is true. The Times Phenomenally powerful ... Her cast is big, and growing all the time, but Smiley has a remarkable grip on all her characters ... So unhurried, so comprehensive and so intimate is the access Smiley allows ... we at once observe how families operate as organisms and feel ourselves embedded in a living, breathing one. Comparisons have already been made with John Updike's towering Rabbit tetralogy, and both writers have an extraordinary ability to define what it is to be American at the most intimate level. But where Updike is the consummate stylist, Smiley speaks more plainly; where he is cool, she is warm. She is also very funny ... and too finely intelligent to stoop to folksiness. In fact, what Smiley feels most like here, for her faultless skill in bringing a wide cast so vividly into being that we would know them anywhere, for the remarkable intensity of her feeling for territory and landscape and her combination of impatient intellect, emotional perspicacity and unfailing humanity, is America's Tolstoy. The satisfactions of the first two volumes of this trilogy have been so complex and nourishing that the comparison seems justified, and the third instalment can't come soon enough. Guardian Jane Smiley is good on places, good on weather, good on meals, all of which matter. She is good too on the silences, the things left unsaid, out of tact or for discretion's sake, in family conversations. She has seen, remembered and imagined her characters very thoroughly, and she perceptively shows how people may change over the years, even while remaining very often essentially the same. She is good on love and desire, the cooling of love in some marriages, its strengthening in others. There is then a great deal to enjoy, and it's a novel in which many readers will happily lose themselves. Scotsman Here is one of America's leading novelists writing at the height, breadth and width of her powers. Magnificent. Daily Mail

Jane Smiley is the author of numerous novels, including A Thousand Acres, which was awarded the Pulitzer Prize, as well as five works of nonfiction and a series of books for young adults. In 2001 she was inducted into the American Academy of Arts and Letters, and in 2006 she received the PEN USA Lifetime Achievement Award for Literature. Her novel Horse Heaven was short-listed for the Orange Prize in 2002, and her latest novel, Private Life, was chosen as one of the best books of 2010 by The Atlantic, The New Yorker, and The Washington Post. She lives in northern California.