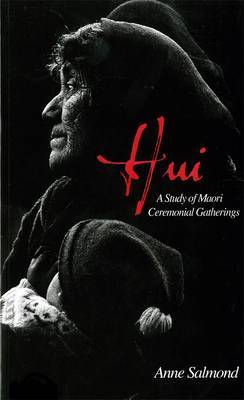 When Maori people gather for a Hui, they have immediate access to an ancestral world which remains a living reality for as long as the hui lasts. Hui incorporate all Maori ceremonial gatherings- openings of new marae, tangihanga (funerals), hurahanga kohatu (unveilings), birthdays and anniversaries, and tribal policy making. This book introduces us to all aspects of the hui and its significance to Maori. It is a definitive study of ceremonial gatherings and the rituals that are the life blood of the marae.

Anne Salmond is a Distinguished Professor at the University of Auckland, New Zealand. One of New Zealand's most prominent anthropologists and historians, Professor Salmond is the author of Hui- A Study of Maori Ceremonial Gatherings; Amiria- The Life Story of a Maori Woman); and Eruera- The Teachings of a Maori Elder (winner of a Wattie Book Award in 1981) which she co-wrote with Erua Stirling. Among her other acclaimed works are Two Worlds- First Meetings between Maori and Europeans, 1642-1772; Between Worlds- Early Exchanges between Maori and Europeans, 1773-1815 (winner of the Ernest Scott Prize in 1998); The Trial of the Cannibal Dog- Captain Cook in the South Seas (winner of the Montana Medal for Non-fiction in 2004); Aphrodite's Island- The European Discovery of Tahiti; and Bligh- William Bligh in the South Seas (a finalist in the 2012 NZ Post Book Awards). She received the CBE for services to literature and the Maori people in 1988 and was made Dame Commander of the British Empire for services to New Zealand history in 1995. In 2009, she was elected as a foreign associate of the National Academy of Sciences (USA) for her excellence in scientific research. She lives in Devonport, Auckland.