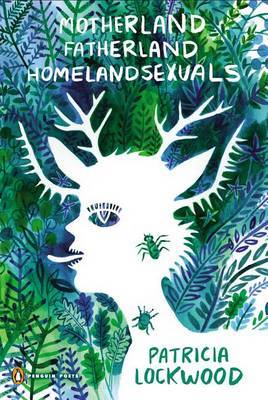 A breathtaking new collection from one of today's boldest and most adventurous poets.

The steep tilt of Lockwood's lines sends the reader snowballing downhill, accumulating pieces of the scenery with every turn. The poems' subject is the natural world, but their images would never occur in nature. This book is serious and funny at the same time, like a big grave with a clown lying in it.

"Her lines feel fresh but footed, with the studious curiosity of Marianne Moore. Lockwood doesn't so much turn the tables as flip the whole house upside down." -- Michael Andor Broduer, The Boston Globe

"Patricia Lockwood's Motherland Fatherland Homelandsexuals is a collection of wildly original poems: obscene, sharp, and funny. ... The whole collection is unforgettable, literally: once read, it cannot be forgotten." -- NPR

"Most of her best lines are wildly unprintable here. ... The little hairs on my back rose often while reading Motherland Fatherland Homelandsexuals, as if it were the year of the big wind. That's biological praise, the most fundamental kind, impossible to fake." -- Dwight Garner, The New York Times

"Lockwood has written a book at once angrier, and more fun, more attuned to our time and more bizarre, than most poetry can ever get." -- Stephen Burt, The New York Times Book Review

"For the nimble, the skeptical, and the restless, writing like this represents a way to be in a country whose failures seem to them as much aesthetic as they are ethical. Lockwood's poems are less a critique of that culture than an alternative opened up sideways to it." -- Jonathan Farmer, Slate

Patricia Lockwood was born in a trailer in Fort Wayne, Indiana, and raised in all of the worst cities of the Midwest. Her debut collection, Balloon Pop Outlaw Black, was released in 2012. Her poems have appeared in the New Yorker, Tin House, the London Review of Books, Poetry, Slate, and The Awl. She lives in Kansas City, Missouri.