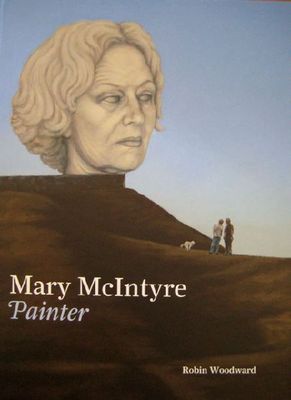 The message in all of these works is incontrovertible: Mary McIntyre will prevail. Nowhere is this clearer the in BIg Head, a majestic and monumental portrait head of McIntyre, which towers over the the mere mortals musing on her. Mere mortals they may be, critics they definitely are - leaning into one another, a little turn of the head, arms akimbo, hands in pockets, pondering, musing and pontificating. Academics or connoisseurs they might purport to be, but McIntyre sees right through poseurs and cuts them down to size. Ultimately they are simply mere males. And what's more, whatever that dog is doing - it isn't doing it on Mary. Here we have Mary McIntyre - the artist, the woman, the person - in control and in command. Mary McIntyre triumphant.