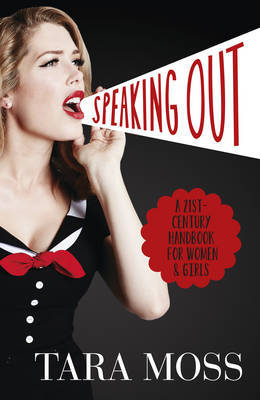 Speaking Out: A 21st-Century Handbook for Women and Girls

An accessible and practical handbook for women on speaking out safely and confidently.

Worldwide, less than one out of every four people we hear from or about in the media is female and men outnumber women in parliament by more than three to one. If half of humanity's experiences, perspectives and possible solutions to world problems are under-represented, or entirely unheard, all of us lose out.
Tara Moss has spent 20 years in the public sphere and has had to face down nerves, critics and backlash. She has become a leader in speaking out. In this handbook she offers advice on preparation, speaking out and negotiating public spaces. With a special focus on public speaking, social media and online safety, she offers tips on how to research, form arguments, find support and handle criticism.
This is a guide for women young and old that not only helps them find their voice, but argues passionately for why it matters.

'A nimbly argued, statistic-laden exploration of the various labels we give women and the impact this has on their lives' Catherine Keenan, ABC the Drum

'Hits its mark with sharp-shooting precision ... Moss' skill is in marshalling the evidence and communicating it in a way that is accessible, warm, open, lucid and passionate ... Moss is a serious thinker' Dr Clare Wright, the Age

'A remarkable book - the kind that rewires your brain and its preconceptions in the best way possible. Intelligent, riveting and invigorating' Benjamin Law, Australian journalist and author

'This is a book which needs to be read by men and women. Well written, clearly argued, informative, powerful and thought provoking. Forget everything you thought you knew about Tara Moss, with the Fictional Woman, Tara sets the record straight and takes her place as one of our generations great commentators' John Purcell, Booktopia

'The most insightful book about women since The Feminine Mystique' Eve Mahlab, AO

'This book will rejuvenate the feminist in you and make you proud to be one' Professor Hannah Dahlen, Midwifery Matters

'The Fictional Woman is a 21st century must-read for all women and their men ...' - Taranaki Daily, NZ