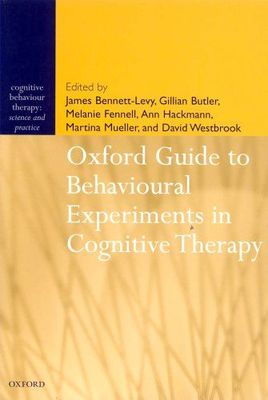 Behavioural experiments are one of the central and most powerful methods of intervention in cognitive therapy. Yet until now, there has been no volume specifically dedicated to guiding physicians who wish to design and implement behavioural experiments across a wide range of clinical problems. The Oxford Guide to Behavioural Experiments in Cognitive Therapy fills this gap. It is written by clinicians for clinicians. It is a practical, easy to read handbook, which is relevant for practising clinicians at every level, from trainees to cognitive therapy supervisors. Following a foreword by David Clark, the first two chapters provide a theoretical and practical background for the understanding and development of behavioural experiments. Thereafter, the remaining chapters of the book focus on particular problem areas. These include problems which have been the traditional focus of cognitive therapy (e.g. depression, anxiety disorders), as well as those which have only more recently become a subject of study (bipolar disorder, psychotic symptoms), and some which are still in their relative infancy (physical health problems, brain injury). The book also includes several chapters on transdiagnostic problems, such as avoidance of affect, low self-esteem, interpersonal issues, and self-injurious behaviour. A final chapter by Christine Padesky provides some signposts for future development. Containing examples of over 200 behavioural experiments, this book will be of enormous practical value for all those involved in cognitive behavioural therapy, as well as stimulating exploration and creativity in both its readers and their patients.

For anyone new coming into CBT, this book provides a wealth of learning and practical advice along with tried and trusted behavioural experiments for all the most common thinking distortions across all the major presenting problems common in everyday practice. Behavioural experiments are one of the mainstays and most powerful methods of intervention in cognitive therapy, so a book devoted to this one subject is well overdue and more than welcome. European Eating Disorders Review, Vol 15 Books like this are few and far between. It works as an accessible introduction to the practice of contemporary CBT, an overview of the most useful cognitive models of psychological disorders, and a unique reference book for finding out practical instructions and creative inspirations. Behavioural & Cognitive Psychotherapy, Vol 33 This new text... will attract interest both as a very valuable addition to the teaching and training resources in cognitive behaviour therapy (CBT), and is the first book to emerge from the Oxford Cognitive Therapy Centre subsequent to the departure of Professors Clark and Salkovskis to London. The volume is produced by the group of research clinicians who carried out the clinical trials and research work in developing cognitive therapy for anxiety disorders at Oxford... Both the wealth of clinical experience within a research framework and their teaching expertise are evident from this publication... In total, the book represents a considerable achievement and a tribute to the extent of CBT expertise within Oxford and the ability of this extended team to work together within a coherent framework. British Journal of Clinical Psychology Each chapter follows a systematic structure, making the book extremely accessible for the busy clinician who will find it easy to use as a resource in the clinic... It becomes apparent that in the hands of the Oxford group, the behavioural experiment becomes a very flexible tool, applicable to more open-ended enquiry as well as precise disconfirmation of predictions and capable of having impact upon all levels of cognition from the specific to the most general and abstract... The book has a much more clinical feel than many other CBT texts: the balance between theory and practice is much more weighted towards the latter; there is more acknowledgement of difficulties and complexities presented by patients in real life and therefore the attitude conveyed shows more humility in the face of such difficulties, making frequent references to therapists' needs for supervision, and so forth, while still conveying enthusiasm and optimism. British Journal of Clinical Psychology This book offers an excellent practical guide in how to carry out effective behavioural experiments... I am glad that I will have [it] on my bookshelf and I foresee using it with profit for the rest of my professional career. If you have only a limited budget for professional books, I would certainly recommend this one as a useful one to own. Clinical Psychology An enjoyable and stimulating read with lots of useful insights. The Psychologist This book is easy to read with clearly structured chapters set out in a consistent format that will appeal to new and experienced therapists alike, and will be invaluable in both the practice of CT and the delivery of training in it. BABCP Magazine